You are here: Home » How To

Published: Mar 12, 2019 · Modified: Aug 25, 2019 by Saima · This post may contain affiliate links. As an Amazon affiliate, I earn from qualifying purchases · This blog generates income via ads. 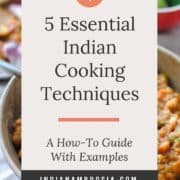 5 Essential Indian Cooking Techniques that will take your favourite Indian recipes from 'meh' to 'wow' ... every time! 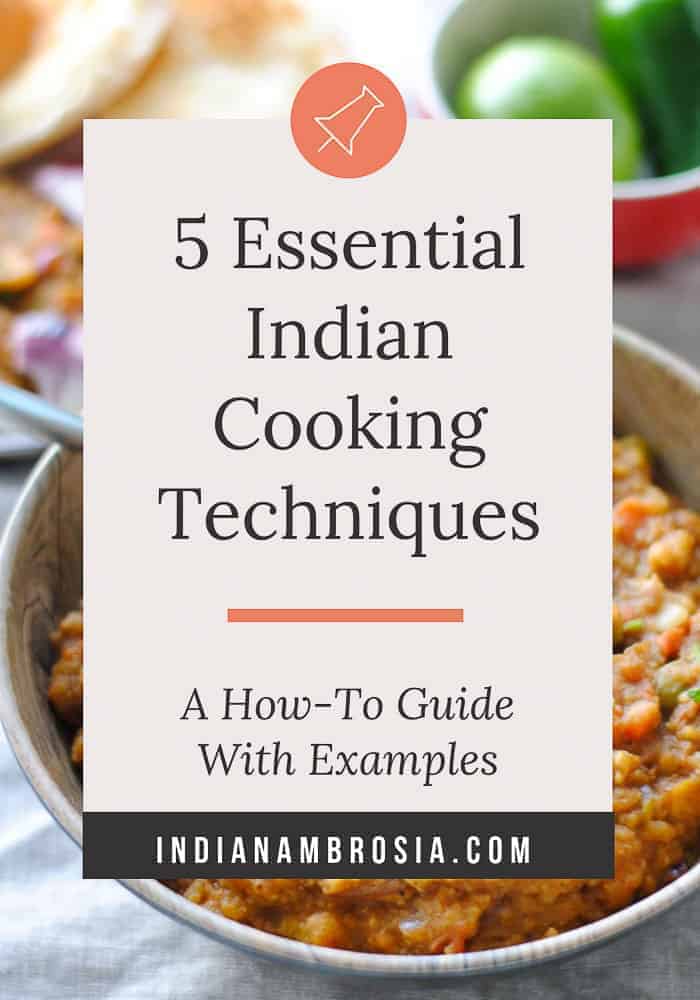 You love Indian food and you find yourself constantly feasting your eyes on drool-worthy pictures of kormas with deep, rich gravies, succulent chicken biryanis and melt-in-the-mouth kebabs all the time. The ones splashed all over food blogs and Pinterest.

Ever wonder what makes them look and taste so darn delicious? Can’t be the recipes. As you probably already know, it takes more than a great recipe to make dishes with the 'wow' factor.

You need to have some behind-the-scenes knowledge of a cuisine to really bring those recipes to life.

Cooks who are aware of Indian cooking methods are able to whip out dishes that look and taste completely authentic.

Now, with the help of this handy guide, you can too!

All you need to do is apply the correct method the next time you cook Indian food. After that, just sit back and soak in the compliments that pour in when you cook that korma or biryani!

There are 5 basic cooking techniques in Indian cooking. They are listed below with their most closely related English equivalents:

Obviously, all these techniques are not applied in every recipe. It's usually a combination of 2 or 3 that completes the cooking process.

However, for the sake of understanding, let's imagine that a lamb recipe needs all five. What follows is a brief description and the order in which they will come in the cooking process.

Indian cooking techniques at a glance

Heat some oil, add whole spices and let them sizzle.

Add finely sliced onions, fry them on medium heat until they caramelize and turn a reddish-brown colour.

Add a little water, cover the pan or vessel tightly, reduce the heat to low and let the food cook gradually in its own steam.

Keep some red-hot charcoal in a small cup in the middle of the food. Drizzle some ghee on it. Cover the pan and let it rest  for a few minutes. Uncover when ready to eat and remove the charcoal.

This, in a nutshell, is how these techniques follow each other in the cooking process. Let’s look at them in some detail now:

Baghar, or tarka (tadka) as it is also known as, can be done in two ways:

A. As the first step in the cooking process

Heat oil and add whole spices like cumin, cloves, cardamom and peppercorns. As soon as the spices begin to sizzle, follow with the rest of the ingredients in the recipe. Baghar as the first step is usually done while cooking meat and chicken curries as well as dry vegetables.

B. As the last step in the cooking process

Heat pure ghee or vegetable oil in a small pan and add whole spices to it. As soon as the spices begin to sizzle, pour the tempered ghee or oil into the bowl of waiting food, usually dal (lentils), beans or rice. Besides dal, some cooked vegetable recipes like palak paneer (spinach with cottage cheese) are also dressed in this manner.

Top tips on baghar as the last step 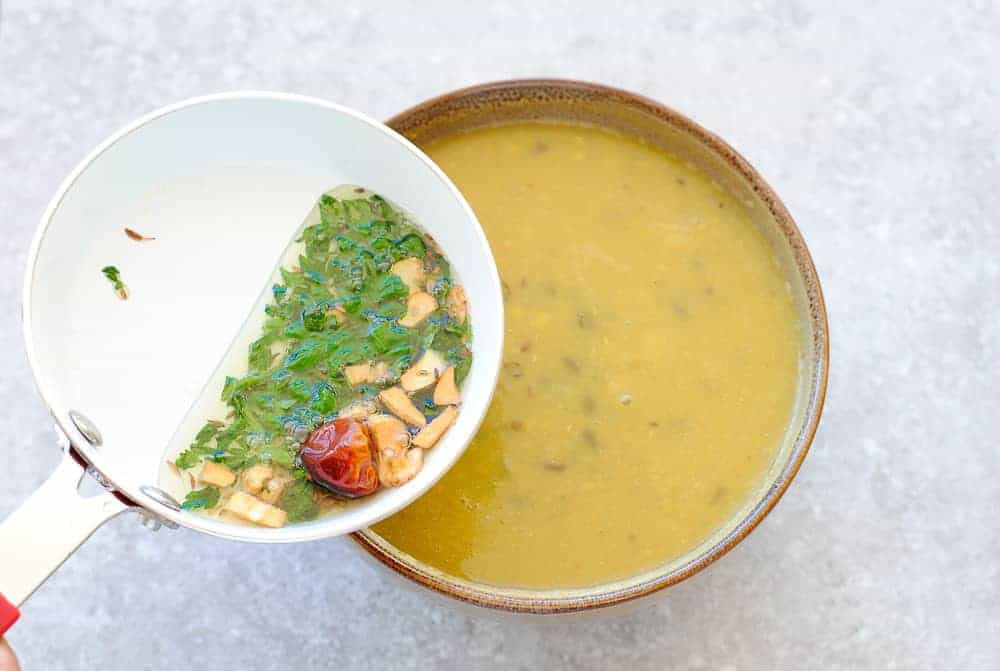 More often than not, you will find yourself frying lots of onions when you’re cooking Indian food. But there’s nothing more frustrating than peeling and slicing those tear-inducing little monsters, waiting ages for them to fry and then ending up with an under or over-browned mess (I’ve been there). In either case, you won’t get the colour or taste of the gravy the way it’s supposed to be.

How to fry onions

Tips for the perfect fried onions 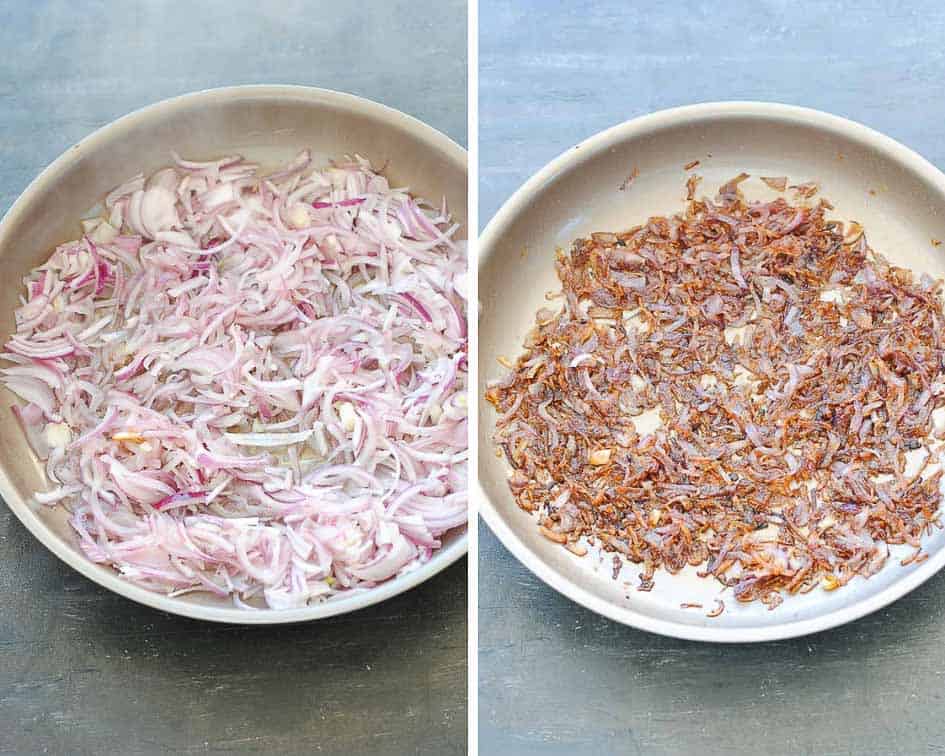 Stir-frying/Roasting the masala (mix of ground onion, ginger, garlic, tomatoes and spices) in oil until it is well cooked and does not smell or taste raw.

GOBI GOSHT - A fantastic lamb curry with cauliflower, onions, tomatoes and spices.
MUTTON KORMA - Succulent pieces of mutton in a rich gravy made with lots of fried onions, yogurt and whole spices.
ACHARI CHICKEN - A bold and spicy chicken curry made in Indian pickling spices.

Dum is, in many ways, the opposite of bhunao. The food is slow cooked for a long time on low heat in a sealed pot. That is the essence of dum.

How to do dum the traditional way

The food is put in a clay pot or a handi (a deep and round vessel), and a firm dough made of wheat flour is used to seal the lid. The pot of food is allowed to heat up on a medium flame first to start the cooking process. Then it is placed over a tawa (griddle) so that the bottom does not come in direct contact with the heat. The heat is lowered further, to the lowest possible, and a handful of red-hot coals are placed on top of the lid to provide heat from above. If it is biryani being cooked, a clean, wet cloth is placed on top of the rice before sealing the pot with dough.

How to do dum the everyday way

A normal dum in everyday cooking simply means covering the food (that's already been bhunaoed) and simmering it on low heat until it is fully cooked. If it's a gravy that's cooking, a little water is also added. No-one goes through the rather involved process described above except when cooking something really special!

The most famous preparations using the dum style of cooking are Hyderabadi dum biryani and Kashmiri dum aloo although the technique can be applied to any recipe.

Dhuanaar is the Indian style of smoking foods. Compared to dum, it is a relatively simple technique and can be done very quickly. We have discussed dhuanaar before; here, I give you an alternate method of doing it, especially if the quantity of meat that you have cooked is not large.

Voila! You have perfectly smoked food ready in a jiffy.

BEEF KEBABS - soft as velvet kebabs that will melt in your mouth
So there you have it. The 5 essential cooking techniques that you must know.
No more wondering why your food doesn’t turn out the way it’s described in the recipes. Because now you know as much about Indian cooking techniques as any seasoned cook.

If you apply these techniques while cooking Indian food, you will notice a difference in the way your recipes turn out. They will look and taste better ... just the way they're supposed to.