Published: May 29, 2021 · Modified: Sep 13, 2021 by Saima · This post may contain affiliate links. As an Amazon affiliate, I earn from qualifying purchases · This blog generates income via ads. 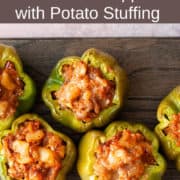 Bharwa shimla mirch is a healthy vegetarian and vegan Indian recipe that's very popular in north India. Small green bell peppers or capsicum are stuffed with a spicy potato filling and baked in the oven. These mini stuffed peppers make for a delicious meal with flatbreads like chapati or plain paratha.

Green peppers and potatoes are the starring ingredients in this aloo shimla mirch recipe as well. This is a wholesome and fresh sabzi (dry curry) that goes very well with Indian flatbreads.

Bharwa - stuffed, shimla mirch - bell peppers. So, stuffed bell peppers is what this recipe translates as. It's a lot of fun to scoop out the potato filling with homemade roti or paratha and take a bite of the softened pepper too. That's the way I like to eat them, but if you're thinking of having them like a snack, go right ahead and dig into them with a fork and knife. They taste quite good either way:)

Why you should use small green peppers for this recipe

The recipe calls for small green Indian bell peppers, usually found in Indian grocery stores. These guys are a little different from the North American variety. They are smaller and taste slightly more 'raw' than their large American cousins.
And oh, I think it's worth emphasizing that Indian stuffed peppers are traditionally made with green bell peppers because that was the only color available in India, back when. Of course, you can go ahead and make this stuffed shimla mirch recipe with different colored peppers, but if you ask me, I would tell you to stick with the green ones. Not only because this is what tradition dictates, but because the taste of orange, yellow, or red peppers is going to be slightly different. The other colors are all mildly sweet and don't have the zing of the green peppers. So, stick with green if you can:)

Russet potatoes are boiled, mashed and pan-fried with chopped onions, a little garlic, and some common Indian spices. The peppers (with the tops off) are then filled with this spicy potato filling.

Variations: You can add some crumbled paneer or Indian cottage cheese to the potato filling. And if you're feeling more adventurous, you can also add some shredded cheddar or mozzarella! This will, of course, make it a vegetarian rather than a vegan recipe , but if you're not strictly vegan and love cheese with anything, it's an idea you might want to try out.

Note: exact amounts are mentioned in the recipe card further down in the post.

How to make bharwa shimla mirch

Stuff the bell peppers and bake in a hot oven 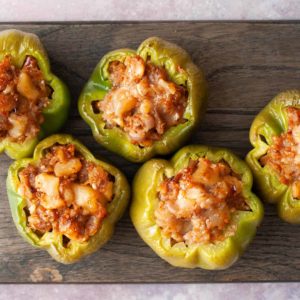 Stuff and bake the peppers