Published: Aug 23, 2020 · Modified: Dec 11, 2021 by Saima · This post may contain affiliate links. As an Amazon affiliate, I earn from qualifying purchases · This blog generates income via ads. 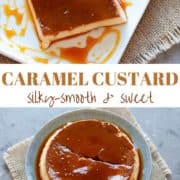 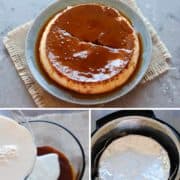 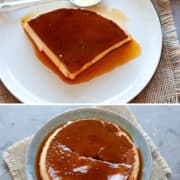 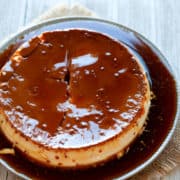 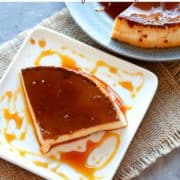 Caramel pudding or caramel custard is a silky-smooth dessert made with milk, sugar, and eggs. It is light and delectable and tastes awesome when served chilled straight from the refrigerator. Comes together easily in the instant pot.

This recipe for caramel custard is for old times' sake. You know, one of those desserts that you've had more times than you care to remember since your mom was so fond of making it. Why? Because it was dead simple to make and satisfied everyone's sugar craving after a meal. Unlike other Indian desserts, it was not labor intensive (you didn't have to stand at the stove top for hours and bhuno it). Above all, it was satisfyingly smooth and milky. Is smilky a word?

To make it even simpler, I've adapted it to the instant pot (affiliate link), my favourite gadget in the kitchen. If you don't have an instant pot, you can make it in your regular stovetop pressure cooker which is how mum made it.

Wonder why I'm claiming this creme caramel, as it is also known, to be an Indian dessert? Strictly speaking, it's not, but it happens to be a crossover recipe of sorts that somehow found its way to Indian homes... and got adopted happily! When I was young, I was under the misconception that it was my mum's innovation. Turns out, most of my friends' mums also made it, and so did my mum-in-law, as I later discovered. My husband has his own set of memories associated with this particular dessert!

If you love the convenience of making desserts in your instant pot, here are two very easy recipes you might like: fruit custard (seasonal fruits dipped in vanilla sauce sweetened with honey) and bhapa doi (a cheesecake like dessert made with yogurt instead of cream cheese).

How to make caramel pudding

In a small frypan or saucepan, mix together one-fourth cup sugar and two tablespoons water. Cook the solution on medium heat without stirring. Shake it if you want but don't stir. After two minutes, the solution will start bubbling and as the water evaporates, the sugar will turn dark and caramelize. As soon as it turns brown, pour the caramel into a dry mould or pyrex dish and let it cool and set.

Note: the mould or pyrex dish that you choose should fit inside your instant pot easily. Make sure it's a good fit before starting with the recipe.

Step 2: Make the sauce for the pudding

Beat three eggs lightly. Pour two cups milk (room temperature or lukewarm but not hot) in a bowl and add the beaten eggs, one-fourth cup sugar and a few drops vanilla essence. Whisk with a fork. Pour this mixture carefully over the caramel that you prepared in the previous step.

Step 3: Pressure cook the pudding in the instant pot

Pour two cups water in the steel insert and place a trivet in it. Cover the pyrex dish with some aluminum foil and lower it into the instant pot. Alternatively, you can place the pyrex dish on the trivet first and then lower the trivet with the dish into the instant pot. Pressure cook the pudding on high for 15 minutes with natural pressure release after the timer beeps. Take it out, remove the foil and let it rest on the counter until it has cooled down completely. It's going to be quite jiggly at this stage, but don't worry. It will set perfectly after a few hours of refrigeration. Keep the dish in the fridge for 4-5 hours or more.

Step 4: Unmould the pudding and serve

Once the pudding has had a chance to chill in the fridge for a few hours, it's ready to be served. Take it out and place a plate on it (the same plate in which you want to serve it). Invert the plate along with the dish in one swift motion. The pudding will fall onto the plate. If you want to be sure that it does not stick to the dish after you invert it, release the sides of the pudding with a blunt knife before inverting it. Serve cold!

More Indian desserts made in the instant pot 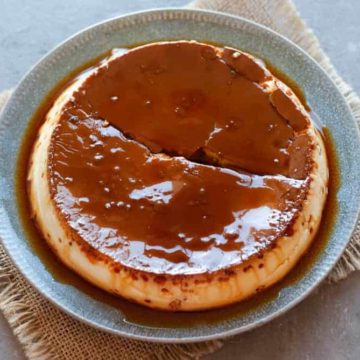