You are here: Home » Chicken

Published: Apr 15, 2018 · Modified: Sep 3, 2021 by Saima · This post may contain affiliate links. As an Amazon affiliate, I earn from qualifying purchases · This blog generates income via ads. 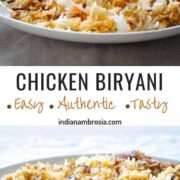 A chicken biryani recipe made with tender chicken on bone, saffron, cashews and long grain basmati rice. So good! Who isn't familiar with chicken biryani? Only someone living under a rock!

The online space is full of one chicken biryani recipe after another. Just type in the phrase in Google and see the sheer number of results that the search engine spits out. It's startling.

Like all things very popular, there are countless variations, and needless to say, all of them are not good. To eat ho-hum biryani is quite a drag, so it's nice to know a few facts about it. Here goes!

To the old khansamas (chefs) of North India, it would be nothing short of blasphemy to add ingredients like potatoes, tomatoes, turmeric (ugh!) or even too much spice in a biryani recipe. These ingredients alter the very nature of biryani, and if I may go so far, corrupt it.

And yet, I have suffered through one overly yellow, impossibly hot, potato filled disaster after another in my biryani eating adventures! I don't know the reason why these versions have become so ubiquitous, but I do know that I prefer biryani the way it was made through the ages in the kitchens of North India: a delicately spiced rice and meat preparation with loads of flavour and taste.

Here, I share with you my chicken biryani recipe that I have perfected over the years. And if you'd rather have a mutton biryani, simply sub the chicken for mutton. Only, cook it longer so that the meat becomes tender. If I'm making mutton biryani, I always cook the mutton in a pressure cooker. And that brings me to my second point.

Surprised? Since traditional biryani has always been made with mutton, not chicken, connoisseurs of the dish actually look down upon biryani made with chicken! It's true that white meat doesn't pack the same punch as red, but I personally think this is a matter of individual taste; it really boils down to which meat you prefer. Chicken or mutton .... it doesn't matter in the end as long as you follow some basic biryani-making principles:)

I can't stress this enough ... you must use the best quality Basmati rice you can find to make biryani. If you make biryani with sub-par rice or any rice other than Basmati, you won't be doing justice to this king of dishes. I use Tilda (no affiliate links) because it is the most fragrant, long-grain Basmati rice I can find in the market.

A special note about my chicken biryani recipe: I have added just a pinch of orange food colour (a very small pinch) to my biryani, but you can skip it altogether. Yes, biryani looks very pretty with those fiery red streaks, but the fact remains that food colour is an artificial ingredient and I am leery of it. The maximum I will add is a few grains and not more.

The solution? I colour my biryani with saffron dissolved in a little milk. Good quality saffron adds a suffused orange-ish tinge to the rice. Your biryani will not look so flamboyant, but it's a much better choice than food colour. Just don't go overboard with the saffron because it has a very distinctive fragrance and taste too. You don't want a biryani that's too saffrony. Here are two more meat and rice dishes on the blog if you're looking for variations: keema biryani and chicken pulao. Pulao follows a different method of cooking but both pulao and biryani are yum!

Ready to give the most awesome chicken biryani recipe a try? Let's go!

For the chicken gravy:

Assembling the chicken and rice for biryani: