You are here: Home » Meat

Published: Jul 25, 2020 · Modified: Sep 28, 2021 by Saima · This post may contain affiliate links. As an Amazon affiliate, I earn from qualifying purchases · This blog generates income via ads. 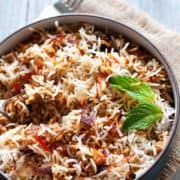 Keema biryani is a fun variation of the classic Indian biryani. Made with minced meat instead of meat chunks, it has the same unbeatable taste and flavor in every forkful of rice!

Do try this naan bread stuffed with ground lamb too if you like meals made with keema as the main ingredient. Like biryani, this is a complete meal in itself.

If you love biryani (who doesn't), you're going to adore this keema biryani. The keema or mince is cooked separately, then layered with spiced, aromatic rice for a magnificent dish that's sure to impress.

The only problem is that the keema itself is so scrumptious that, sometimes, it never gets to the biryani stage! Sometimes, I set out to make biryani but polish off the keema with tandoori roti or naan without following through with the rice part of it! Crazy, I know.

Goofiness aside, making a good keema base is, in fact, one secret to making good biryani. The biryani will taste good only if the keema is well made. Another is to put the keema and rice on dum after layering them together, a technique of cooking which we'll talk about later in this post. Biryani is not just about mixing the rice and keema and eating it right away. Great tasting biryani happens when you follow the right techniques in preparing it.

Anyhow, I digress. Coming back to our keema biryani recipe, here are the ingredients you will need.

Note: exact amounts are mentioned in the recipe card further down in the post.

And a few optional ingredients:

You can add some or all of these ingredients to really take your biryani to the next level. In the biryani picture above, I used mint leaves as a garnish and orange food colour to make it visually more appealing.

How to make keema biryani

For making keema biryani, you need to cook the keema and rice separately, then bring them together and cook them on dum again for perfect results.

For cooking the keema, I used an instant pot (affiliate link), and for the rice, a large, broad pot or vessel like a big dutch oven with a tight-fitting lid. Remember, the rice needs to expand, so you can't cook it in a small vessel.

Make the keema - I made it in my instant pot, but you can also make it in an open pan on the stovetop; you'll just have to cook it for longer and keep an eye on it so it doesn't burn.

Switch on your instant pot to sauté (medium heat) and add the other half of the cooking oil and the remaining sliced onions. Sauté the onions to a reddish-brown doneness, then add the mince. Cook for five minutes, then add the wet masala prepared earlier followed by the biryani masala (I used Shan, a popular Pakistani brand). Cook for ten minutes, then cancel sauté. Switch to pressure cooking mode, add half a cup of water to the mince and cook for five minutes with pressure release after five minutes. If the mince still has some liquid, dry it on sauté mode again.

Prepare the rice - While the keema is cooking in the instant pot, put a large and broad vessel or pot on the stovetop and add 12 cups water, the whole spices and salt. Bring the water to a roiling boil, then add the drained rice to it. When the rice is about three-fourths cooked (al dente), drain it in a colander over the kitchen sink.

Layer the keema and rice together - Return about one-third of the rice to the pot in which you cooked it and spread it out at the bottom. Layer half the keema on top of the rice and follow with a layer of rice. Top this with the remaining keema followed by the last layer of rice.

Now, gently reheat the caramelized onions in the oil you prepared earlier and pour this over the topmost rice layer. If using any of the optional ingredients add them at this point on top of the rice.

Put the biryani on dum - Sprinkle half a cup of warm water (I prefer some warm milk) evenly on top of the rice. This will generate steam inside the pot and allow the rice, which was only three-fourths cooked before, to soften and cook completely. It will also allow the spices and masala from the keema to penetrate into the rice.

Cover the pot with a tight fitting lid. Some dough can be pressed around the edges of the pot as well to make a tighter seal, although this is overkill if you already have a tight-fitting lid. Keep the pot back on the stovetop on the lowest possible heat. Let the rice and keema cook undisturbed on this gentle heat for at least ten to twelve minutes. However, don't open the pot just yet. Let the pot of biryani rest on the hob anywhere from twenty to thirty minutes after switching off the heat.

Finally (finally!), open the pot and fluff up the rice using a fork. Make sure you dredge up the bottom layers also as all the oil tends to settle down there and the top layers can seem dry. Serve hot with some raita (a yogurt dip) and enjoy!

How to make raita for biryani

Biryani is typically served with yogurt, usually in the form of a cooling raita. The two complement each other perfectly, just like peanut butter and jelly or macaroni and cheese. I am including the method to make raita in brief, in case you want the recipe.

A basic raita is made by thinning the yogurt with some cold water and whisking it to make it smooth (one-fourth cup of water is enough for one cup of yogurt). Add roasted and ground cumin, some kala namak (a kind of rock salt with a sharp, tangy flavor) and half a teaspoon sugar, mix it well and you're done. You can add a little red chilli powder as well, but I don't like spicy raita so I generally skip it.

You can also add grated cucumber, boondi (very small fried chickpea flour balls that come in a packet in Indian stores) and even pineapple chunks to the whisked yogurt. And here's an onion raita (pyaz ka raita) from the blog if you're interested. 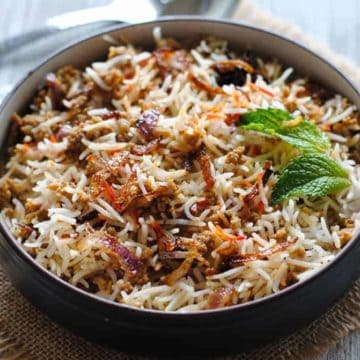