You are here: Home » Paneer

Published: May 15, 2021 · Modified: Nov 12, 2021 by Saima · This post may contain affiliate links. As an Amazon affiliate, I earn from qualifying purchases · This blog generates income via ads. 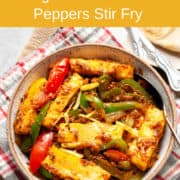 Paneer Jalfrezi is a colorful vegetarian stir fry made with cottage cheese, vegetables like onions, tomatoes, green peppers, and powdered spices. It is a simple and healthy recipe that's quite popular with paneer lovers everywhere. Ready and on the table in 20 minutes!

If you like cooking with fresh vegetables, bharwa shimla mirch is another very tasty recipe. Green bell peppers are stuffed with a spicy potato filling and baked in the oven. They are delicious!

What is paneer jalfrezi?

Paneer is soft Indian cottage cheese that is very popular in North India. It is a ricotta like firm cheese that doesn't melt when cooked. Jalfrezi comes from the Bengali word jhal which means peppery or spicy. So paneer jalfrezi is a medium-hot vegetarian stir fry, perfect when served with some crisp naan or tandoori roti.

Interesting question! It's an explosion of distinctly Indian textures and flavors. When soft paneer fingers meet onions, tomatoes, and crispy green peppers with a slight bite to them, when fresh spices deepen the flavors....that's when you get a dish like paneer jalfrezi.

A quick and simple recipe

This paneer jalfrezi recipe is a rustic, dhaba-style preparation that you can make quickly in a wok or karahi. It does not require any special or hard to find ingredients or spices, and I really meant that! I'm guessing you do have onions, ginger, garlic, tomatoes, and green peppers lying around in your pantry and fridge. If you also have some basic spices - turmeric, red chilli, cumin, coriander, and garam masala - you're all set to make this tasty dish:)

As you can see in the image below, I've cut the cheese and vegetables in long strips. Doesn't make a difference to the taste, of course, but it's the way restaurant style paneer jalfrezi is made, and it's visually pleasing!

A note on paneer or Indian cottage cheese

If you are in North America, paneer is available in most Indian grocery stores and nowadays even in big chain supermarkets like Walmart and Superstore. However, if you live in an area where paneer is difficult to get, here's a super simple recipe for making your own paneer With just two ingredients, milk and lemon juice (or vinegar), you can make homemade cottage cheese in a snap.

Besides, homemade paneer is softer and tastes much better than store-bought paneer. However, if you are in a hurry and must use store-bought paneer, an easy hack to soften it and get rid of the extra fat is to immerse the whole block in hot water for about 15-20 minutes. It becomes soft and you can slice through it easily.

The actual cooking is very simple and quick as the ingredients are added one by one and quickly stir fried over medium to high heat. However, you do need to slice and chop the vegetables, so that's the first, prep step.

Want still more paneer in your life? Check out all the paneer recipes on the blog! 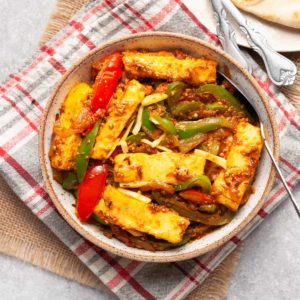