You are here: Home » Vegetable

Published: Dec 15, 2018 · Modified: Sep 3, 2021 by Saima · This post may contain affiliate links. As an Amazon affiliate, I earn from qualifying purchases · This blog generates income via ads. 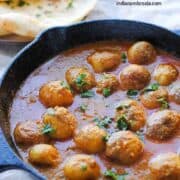 Punjabi dum aloo is made with fried baby potatoes slow-cooked in a classic onion-tomato gravy along with cashews, yogurt and spices. Delicious when paired with Indian naan or steamed rice!

Punjabi dum aloo is a hearty potato curry that you are sure to fall in love with. It has a fantastic onion-tomato gravy that is taken to the next level with the addition of cashews and yogurt ... a killer combo. The cashews make the gravy wonderfully smooth and creamy, and the yogurt adds a very pleasing tang to it. Have this dish with hot naan or steamed rice and you'll become a fan for life. Guaranteed!

If you love your spuds like I do, try a close cousin of this recipe, Kashmiri dum aloo. The Kashmiri version is made without any onions, tomatoes or even ginger and garlic, yet, the taste is distinctly dum aloo-ish! Maybe because the cooking technique is similar. Or because the other ingredients, like fennel and yogurt, are common to both. At the end of the day, both recipes are winners in my book!

How to make this Punjabi dum aloo recipe

There is a fair bit of advance prep involved in making dum aloo before you get to the actual cooking. However, once you have everything ready, putting it together is a cinch.

Prepare the ingredients for dum aloo

Boil the baby potatoes until they are soft but still firm. The skins should not split since we are going to simmer them in gravy later. You can prep the potatoes in a saucepan or in an instant pot if you have one.

Take them out of the water and let them cool down. Prick all over with a fork. I don't peel the potatoes as I find it very time consuming. Shallow fry in hot oil until browned. The potatoes in dum aloo are traditionally deep-fried, but I have found that shallow frying gives almost the same results.

Make the dry masala: put fennel, cumin and coriander seeds in a spice grinder and whiz. Mix in Kashmiri red chilli and turmeric powders. Your dry masala powder is ready.

Make the onion and ginger garlic pastes: put the chopped onion with a few tablespoons water in a blender and whiz until you get a smooth puree. Do the same with the ginger and garlic.

Alternatively, you can put all three together in the blender and make one paste. I don't do this because I like to make a big batch of ginger-garlic paste which I keep in the fridge for later use.

However, if you want to make them together for the sake of convenience, add 2 medium onions, 8-10 garlic cloves and an inch long piece of fresh ginger along with ¼th cup water to a blender and blend until you get a smooth paste.

Make the tomato puree: put the tomatoes in the blender and blend.

To make things easier, you can put the tomatoes and cashews together in the blender and make one paste.

Cook the dum aloo in a skillet

Heat the oil in a medium-hot skillet and put the whole spices (black cardamom, cloves and peppercorns) in it. Follow immediately with the onion and ginger-garlic pastes.

Roast this masala very well so that the raw smell goes, and it becomes thick and shiny. This should take around 10-12 minutes. If the masala starts sticking to the pan, add a few tablespoons of water while roasting. This is an important step, so don't skip it. The final taste of any gravy made in the Indian style depends a lot on how well you roast it in the initial stages.

Roast this masala again for 10 minutes or until the water evaporates.

Add the fried baby potatoes and 2 cups water. Mix well and cook on a low flame for 20 minutes.

Top with some chopped cilantro, and punjabi dum aloo is ready to be served with fresh naan bread! 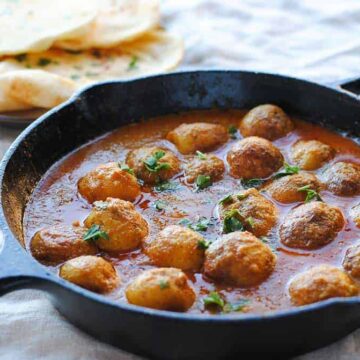 Did you make this recipe? Don't forget to give it a star rating below!