Published: Aug 10, 2020 · Modified: Dec 11, 2021 by Saima · This post may contain affiliate links. As an Amazon affiliate, I earn from qualifying purchases · This blog generates income via ads. 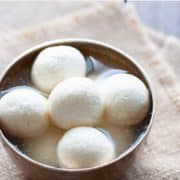 This rasgulla recipe is all about soft, spongy, and light-as-air balls dipped in a sweet sugar syrup. Made with chena, a special milk cheese, here's one Indian dessert you'll not want to miss!

Do try this shakarkandi kheer as well if you are into traditional Indian desserts. It is a rich caramel color and and very tasty, thanks to all those sweet potatoes.

For those who know and relish them, Bengali rasgulla or roshogulla really don't need any introduction. You know the sensation of popping a fat, juicy rasgolla in your mouth and experiencing its delightful sweetness. What you may or may not know is that you don't always have to buy expensive rasgullas from a sweet shop or restaurant. These fluffy balls of sweetness can be made right at home with an easy process and a few simple ingredients. It's just a matter of getting the technique right, and in this post, I will share with you the finer points of making light, spongy rasgullas that never fail. Ever!

For my readers who have never tasted rasgullas (ras - syrup, gulla - ball), they are cheese balls dipped in sugar syrup, an extremely popular dessert in North India. Cheese balls in syrup? I know, this might sound funny and even gross in translation. BUT. This is not your regular cheese, folks. It's an unsalted, super-soft cheese called chena, the not-so-secret ingredient used in most milk-based Indian sweets like rasmalai, chum-chum and sandesh.

Which brings me to another point that needs to be discussed: the difference between chena and paneer or Indian cottage cheese. This is a crucial difference to know about because the process to make both is very similar...and you don't want to end up with paneer instead of chena for making rasgullas!

Difference between paneer and chena

Paneer is used to make savory curry as well as non-curry dishes like kebabs in Indian cuisine. Chena, on the other hand, is used for making sweets.

Both paneer and chena are made by curdling milk, but the difference lies in the technique. First, while making paneer, the curdling agent (lemon or vinegar) is added to boiling milk. Second, the cheese obtained after the milk solids and whey have separated, is allowed to remain in the hot liquid for some time, thus hardening slightly in the process. It is set into a semi-hard block later on to be cut into pieces.

Chena, meanwhile, is a softer version of the same cheese. While making chena, the curdling agent is added to moderately hot milk, not super-hot boiling milk unlike paneer. Second, the cheese is removed at once from the hot liquid so that it doesn't harden even slightly. It is then kneaded gently to yield a smooth, paste-like and very soft cheese called chena.

This is a crucial difference to understand because if you don't get the technique right while curdling the milk, you will get paneer instead of chena and end up with hard and sweet paneer balls instead of soft and spongy rasgullas! This happened to me in my earlier trials of making rasgullas and I learnt, after much grief, to make chena the right way!

How to make rasgullas

1. Set the milk to boil in an open saucepan on your stovetop. When it starts boiling, take it off the heat and stir with a spoon for one or two minutes to bring down the temperature a bit. Then add the lemon juice or white vinegar plus water solution (the curdling agent) to the milk, one teaspoon at a time. Keep stirring the milk while you're doing this and you will see that gradually the milk solids will separate and leave behind a greenish whey. These milk solids (chena) is what you want for making the rasgollas.

2. Line a colander with cheesecloth and place it over a deep bowl. Pour the contents of the saucepan into the colander. The liquid will collect in the bowl and the cheese or chena will be left behind. Wash the chena that's left in the cheesecloth with cold water to get rid of the smell of the lemon or vinegar and to further bring the temperature down. You can place the colander under a steady trickle of tap water to do this. Gather up the cheesecloth from all the four corners and squeeze to get rid of the excess moisture. If there is moisture in it, the rasgullas will not retain their round shape later on.

3. Turn the chena on to a flat and wide platter (a clean wooden cutting board can be used). It is going to be soft and crumbly at this stage. Add the cornflour and white flour and start rubbing it back and forth with the palms of your hand. After 3-4 minutes, the chena will lose its crumbly texture and become pasty and smooth.

4. Break off a small portion and shape into a ball. Repeat until you have used up all the chena. Keep the balls covered with a damp cloth while you prepare the sugar syrup.

Make the sugar syrup and add the chena balls

Put the sugar in a large pot along with 5-6 cups of water on the stovetop and bring to a boil. The syrup needs to be thin and very hot when you drop the chena balls in, so don't make it ahead of time. As soon as the syrup starts boiling, drop in the prepared chena balls and cover the pot with a tight-fitting lid.

Tip: It is important to not lower the heat at this point or remove the lid. Doing so will make the rasgullas hard later on.

Let the balls cook undisturbed for 10 minutes. After 10 minutes, you can remove the lid but let them cook in the syrup for an additional 5 minutes. When you take off the lid, you will see that the balls have doubled in size.

Now, let the rasgullas cool down in the syrup. They will shrink a bit at this stage but not too much. When cooled completely, take them out in a bowl along with the syrup and keep in the refrigerator for at least 4-5 hours, more if you can wait. The rasgullas will have absorbed the sugar syrup in all this time.

When ready to eat, take the bowl out of the fridge and pick one rasgulla from the syrup and press it to test the sponge. When you drop it back in the syrup, it will go back to its round shape! These are the kind of rasgullas you want: sweet, light and full of sponge.

Some important tips to make light and spongy rasgullas

I did mention a few things before, but these tips are so essential to making the perfect rasgollas that I have to say them again:

And there you are! If you follow these simple tips, your rasgollas will be like the ones you get from your favorite restaurant or sweet shop: sweet, light and spongy. The way they should be.

Shahi Tukda - An indescribably sweet and rich dessert made with bread fried in ghee and soaked in sugar syrup and milk. Saffron, nuts, and rose petals add a royal touch!

Kesar Pista Kulfi - This saffron and pistachio kulfi is the creamiest, dreamiest Indian ice cream you can make at home. Perfect for hot summer days!

Bhapa Doi - A fabulous chilled dessert resembling cheesecake. Made with Greek yogurt and a strawberry topping, it is super creamy and healthier than regular cheesecake. 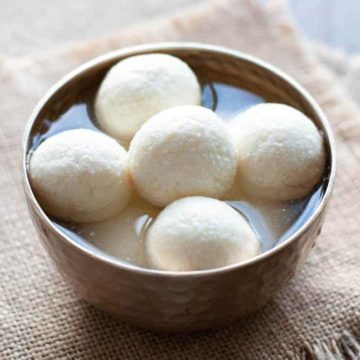 Did you make this rasgulla recipe? Don't forget to give it a star rating below!