Published: Oct 20, 2018 · Modified: Jan 18, 2019 by Saima · This post may contain affiliate links. As an Amazon affiliate, I earn from qualifying purchases · This blog generates income via ads.

Shahi Tukray is an utterly decadent bread pudding made of fried bread pieces dipped in sugar syrup and milk. A topping of nuts and cardamom makes it truly royal! 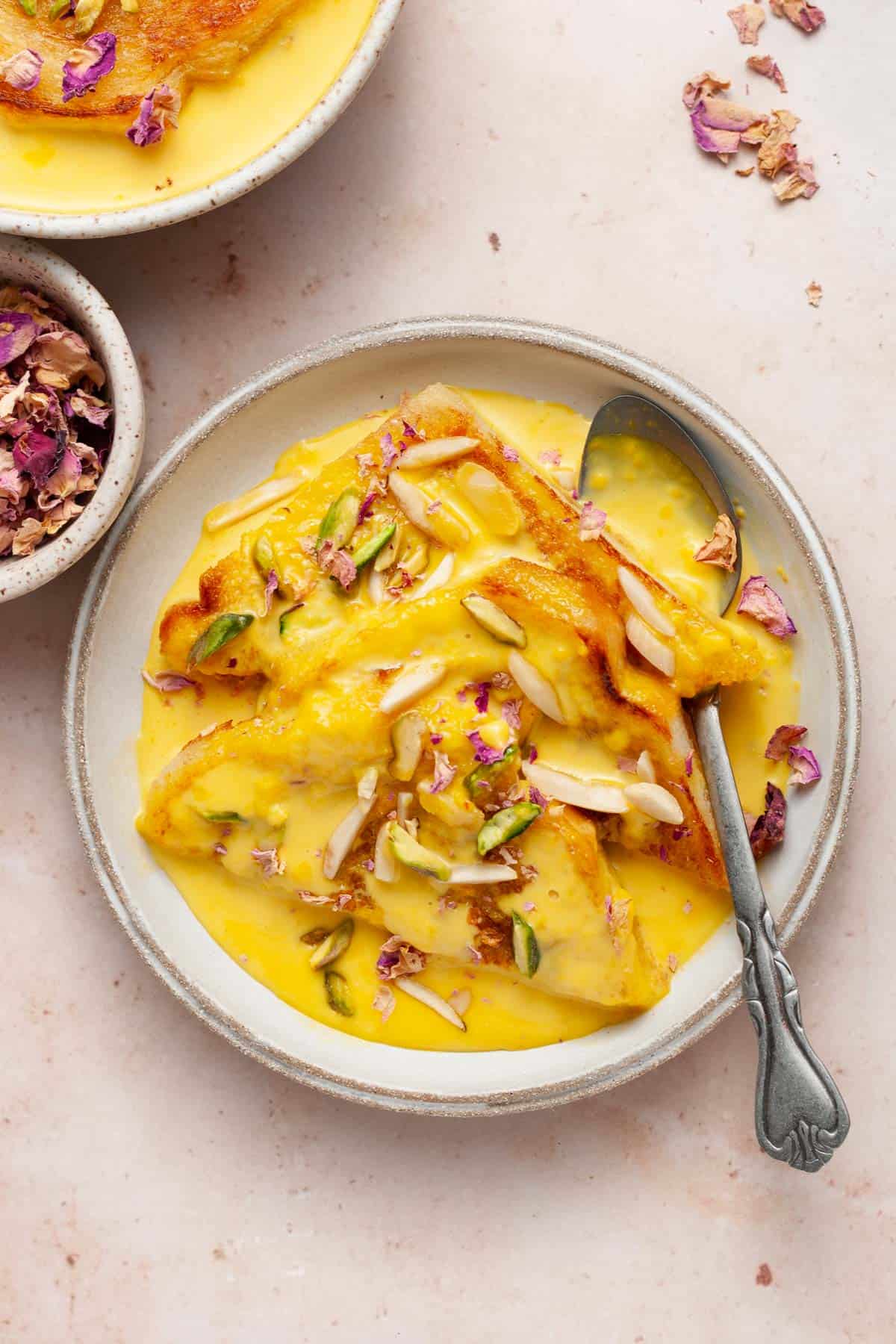 How to make Shahi Tukray:

The recipe for Shahi Tukray is pretty straightforward. Here are the basic steps:

Traditionally, bread is deep fried in ghee, but the amount of ghee the bread soaks up, especially when it is deep fried, terrifies me! So, I have come up with an innovation that works just as well. I slather the slices with butter and shallow fry them instead. Even if I am a little generous with the butter (which I am), it doesn’t come close to the amount used when deep frying. But the effect is the same, so it works just fine.

This is easy. Just dunk the sugar in a little water and cook for a few minutes. You’re done right when the syrup becomes thick and sticky.

3. Cook the milk and cream

This is the most time-consuming step of all as I refuse to use condensed milk. It’s the easiest thing in the world to open a can of condensed milk, and you can even skip step #2 this way. But really, the taste of Shahi Tukray is just not the same, so don’t skip any steps, please!
So then, pour the cream into the milk, add a pinch of food colour and cook this concoction until it thickens. Then add a few drops of kewra water (extract of pandanus flowers).

Now comes the fun part. Once everything’s ready, it is only a matter of putting the dish together. First, dip each shahi tukra in the sugar syrup, then milk. Top up with the slivered nuts (pistachios and almonds) and cardamom powder and voila! Shahi tukray is ready!

Substitutions for the Shahi Tukray recipe:

1. Butter instead of ghee

This, I've already mentioned before. It's okay to use butter for shallow frying the bread pieces if you don't want to use a gallon of ghee or oil. The shahi tukray will have a nice, buttery taste.

2. Evaporated milk instead of whole milk

Again, this can be done without much effect on the final outcome although I much prefer boiling whole milk. It's healthier than something out of a can! Evaporated milk will work, however, if you're in a time crunch.

3. Saffron instead of food colour

If you're leery of food colour (although I use a very small pinch of it), you can easily use a few strands of saffron. Even the most good quality saffron will not give the same orangish hue, of course, so if you don't mind your shahi tukray to be a bit on the paler side, go for it by all means. And there is definitely something to be said for the taste of saffron. It has a warm, distinctive taste all its own. A word of caution though: don't go overboard with the saffron as too much of it can easily overpower the dish. Less is more and 4-5 strands will suffice!

4. Rose water instead of kewra water

Kewra water adds a very pleasing fragrance to the shahi tukray. But if it is not easily available (I can't imagine making a trip to the Indian store for just one ingredient), then by all means use something that is there. Rose water works well too. If you don't have either ingredient, it's still not going to make a huge difference, so don't fret! 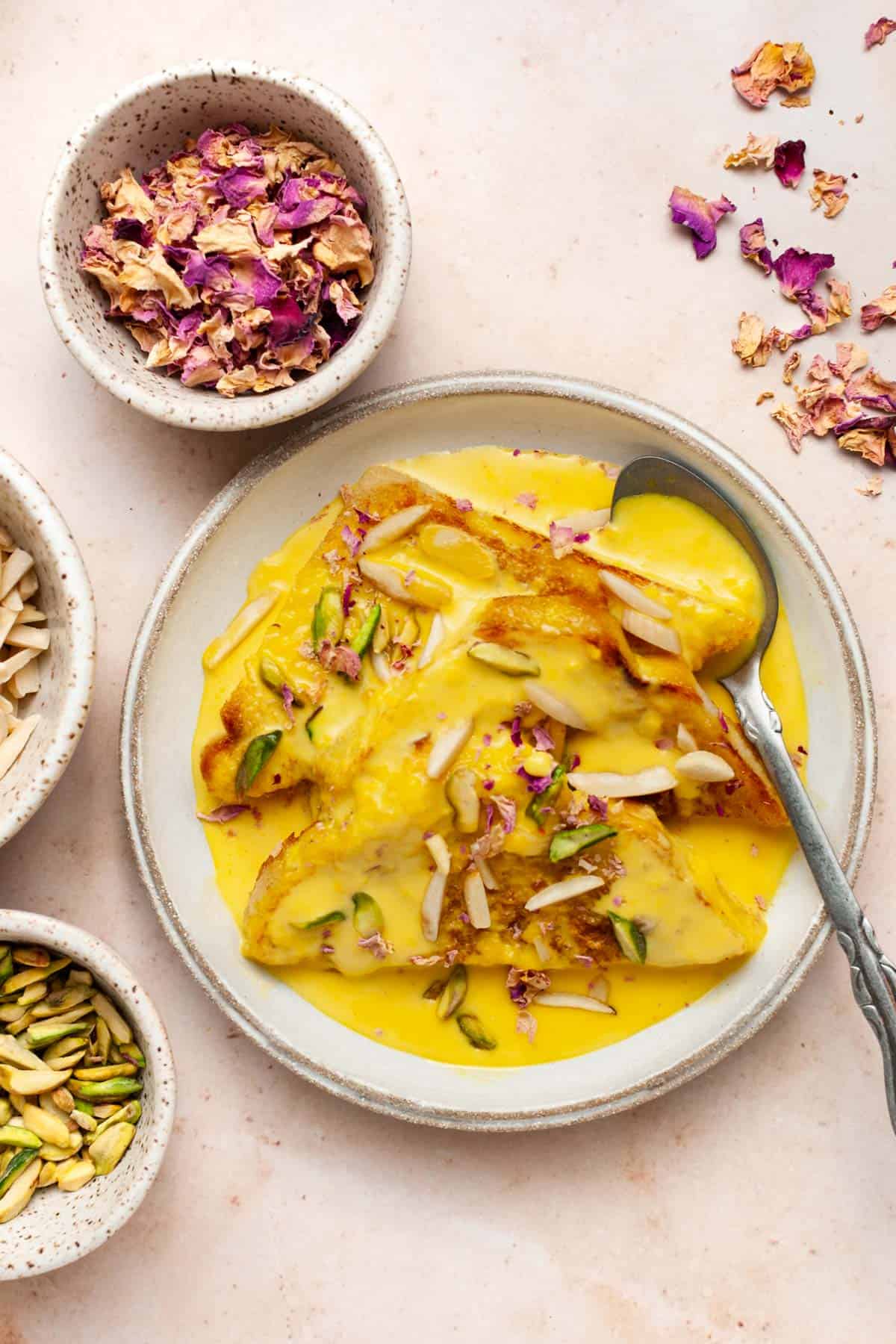 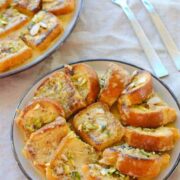 A decadent bread pudding, Shahi Tukray is made of fried bread slices dipped in sugar syrup, then soaked in milk and finally topped with nuts and cardamom powder. Simply heavenly!

STAY UP TO DATE

Sign up for our newsletter to get the latest recipes, how-to posts and useful, actionable content from around the web.

Psst! You will also receive an E-COOKBOOK and RECIPE BINDER PRINTABLES in two beautiful styles! 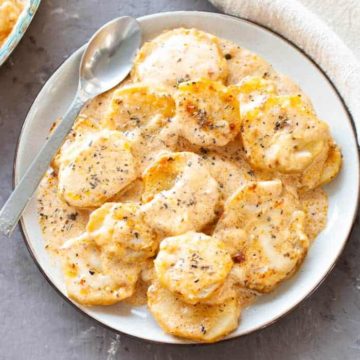 Hi there, I'm Saima. I live in Edmonton, Alberta with my husband and twin boys. My most favorite things are long summer days, ice cream and reading books. Welcome to my blog! Read More.

SUBSCRIBE TO THE INDIAN AMBROSIA NEWSLETTER TO GET THE LATEST POSTS, NEWS AND FREEBIES