Published: Jan 20, 2019 · Modified: Oct 6, 2021 by Saima · This post may contain affiliate links. As an Amazon affiliate, I earn from qualifying purchases · This blog generates income via ads. 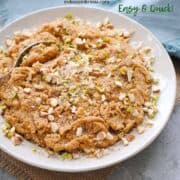 Suji ka halwa is one of the most popular and droolworthy semolina desserts ever. Wonderfully soft and grainy, this sweet confection from India will win you over!

Another recipe that uses semolina is this panjiri recipe. It is a dry mixture of whole wheat flour, semolina, nuts and seeds all roasted in ghee. It's packed with nutrition and simply delicious!

Hello suji ka halwa or sooji halwa! Indian cooking is no stranger to semolina desserts and this halwa is my adaptation of a classic recipe that anyone even remotely interested in Indian sweets would know about.

Here's the other, more basic but equally delicious version of the semolina halwa.

In today's post, I jazz up the simple semolina halwa with two ingredients that really take it to the next level.

Don't believe me? Just make it for yourself and see.

But I'm getting ahead of myself. Before I launch into the details of making it, I must take care of a few FAQs. I'm always asked these whenever I make this dessert, so now's a good time to answer them.

What is semolina or suji flour?

Yes, believe it or not, I do get asked this question often, and I'm not surprised any more. Semolina flour is widely used in Indian and middle-eastern cooking, but not so much in American cuisine, I should think, although it is available easily.

Anyhow. For the uninitiated, semolina flour is made from grinding durum wheat, the same ingredient that's used to make pasta. That makes pasta and suji ka halwa cousins, the most unlikely relatives ever!

Here are some more facts about semolina flour:

What is halwa made of?

In case you are unfamiliar with halwa, it is a broad term used for rich and dense desserts made with one main ingredient plus ghee, sugar, milk (though not always), nuts, and spices like cardamom. The main ingredient can be anything from flours like semolina and wheat to carrots, dates and even eggs! Yes, egg halwa is quite delicious. Surprising but true.

Okay, so now that that's out of the way, let's get down to the suji halwa making process.

How do you make suji ka halwa?

In its simplest form (familiar to most people), this halwa is made without milk. Suji or semolina is dry roasted in a pan until it turns medium brown in colour and then cooked in water, ghee and sugar. Nuts like almonds are also added sometimes. The semolina absorbs the water pretty quickly and becomes a fluffy, soft mush called halwa.

It's made in minutes especially if you have the dry, roasted semolina at hand. Nothing too fancy but it is quite nice to eat, especially when you have a craving for something sweet but quick.

I have made one significant change to this recipe. My halwa is milk based rather than water based. So, instead of water, I usually add evaporated milk + milk powder to the semolina. You wouldn't be able to guess, but these two ingredients transform the humble suji ka halwa to something quite spectacular in taste. Take my word for it:)

And here's how to make it:

Step 1: Dry roast the semolina flour in a pan until it turns brown in colour. It gets roasted in 5 minutes but you do have to keep stirring it continuously to prevent burning.

Step 2: Divide the nuts (almonds and pistachios) into two equal halves. Chop one-half of the nuts coarsely for garnishing later. Grind the remaining nuts and cardamom in a spice grinder. You can do the nuts first and then the cardamom or both together. It doesn't matter as it's all going in the same cooking pot at the same time.

Step 3: Heat the ghee in a heavy and deep bottomed cooking pot and add all the ingredients except the chopped nuts. Cook on low to medium heat for 10-12 minutes or until the halwa becomes thick and starts leaving the sides of the pot.

You will have to keep stirring continuously to prevent it from sticking to the bottom, and it will get harder to stir as it thickens, but keep at it! You don't want a burnt mess on your hands. It's done when you can't stir any more and it has thickened quite a bit.

Step 4: Take out the halwa in a shallow dish and garnish with the chopped nuts. Serve warm.

This halwa keeps in the fridge for a few days. When you want to have it, take out some in a bowl and microwave for a few seconds. It will be good to eat!

Besan halwa - Made with chickpea flour, ghee, jaggery, milk, and nuts, this halwa is perfect for serving on special Indian holidays like Diwali, Holi, and Eid!

Moong dal halwa - Cooked and mashed mung lentils are roasted in ghee, cardamom, saffron, and sugar to make an irresistibly sweet halwa. Made in the instant pot for ease!

Carrot halwa - The starring ingredient of this halwa is carrots...lots of them! Another instant pot recipe. 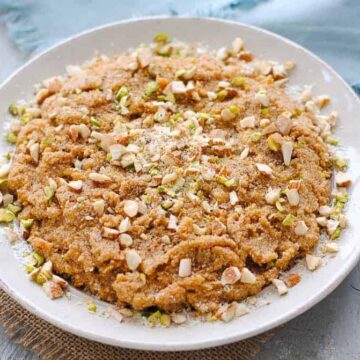