Published: Apr 15, 2018 · Modified: Sep 3, 2021 by Saima · This post may contain affiliate links. As an Amazon affiliate, I earn from qualifying purchases · This blog generates income via ads. Chilli Paneer is one of those hybrid dishes that is not traditionally Indian but not completely foreign either. Strictly speaking, ingredients like soya sauce, corn flour and red chilli sauce are not used in ‘Indian’ cooking, but what the heck! It’s an awesome paneer dish that is high on taste and goodness (think coloured peppers).

You don’t have to eat it with rotis or naan. Since it’s a dry chilli paneer (thanks to all that cornflour), it can be had as a snack. But of course, if you’re very hungry, it pairs very well with any Indian bread which is how most vegetables are eaten in India.

The best thing about it is that it is so quick to make. When you have guests coming at short notice, just shallow fry some paneer, add it to the other ingredients, stir a few times and it’s ready. No slaving over the stove for hours and working up a sweat.

Writing about chilli paneer is making my mouth water. I’m off to make some!

If you're in the mood for another, really good Indo-Chinese recipe that comes together real quick, try this gobi manchurian from Your Veg Recipe. It has cauliflower as the main ingredient. 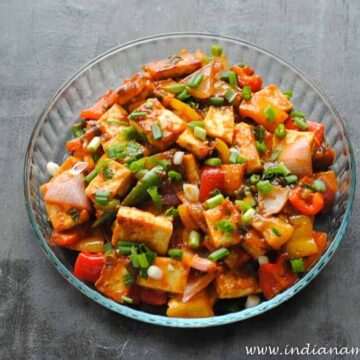