You are here: Home » Grains and Bread

Published: Aug 8, 2021 · Modified: Sep 28, 2021 by Saima · This post may contain affiliate links. As an Amazon affiliate, I earn from qualifying purchases · This blog generates income via ads. 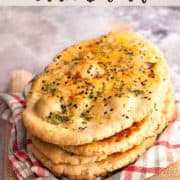 This whole wheat naan recipe makes soft and pillowy naan to go with all kinds of curries and stews. You'll never want to buy the pre-packaged naan from the supermarket once you try this authentic and healthy naan recipe you'll make right at home.

If you're a vegetarian, pair naan with paneer butter masala for a fantastic meal!

Hello, naan! You're my most favorite bread out there and I don't mind looking at your glorious face every single day of the year. That's how much I love you, haha!

Yes, that's really how much I love this Indian bread:) Give me a bowl of butter chicken or chicken korma and watch me demolish it along with a stack of naan! And I feel really good about eating it because oh happiness, I have made it with unbleached whole wheat flour or atta, the stuff most people make roti or chapati out of. So, this makes it an atta naan recipe, a healthy naan bread that you can have with no guilt attacks.

Don't skip the yeast: A lot of recipes for naan you will see online use only baking powder and omit the yeast. And that's totally fine if you want to cut yeast from your diet. However, here's my two cents. If you want to make whole wheat naan bread that tastes like naan, do add yeast. Both baking powder and yeast will create those characteristic bubbles or air pockets in the naan, but yeast does more. It gives the bread a wonderful softness and taste that no amount of baking powder will give. Once you start making your bread with yeast, you'll see the difference!

Use instant dry yeast: As you might know already, dry yeast comes in two forms: active and instant. Although both forms will work, I recommend instant dry yeast and have used it in this recipe because it is more easy to work with. Unlike active yeast that needs to be activated first, instant yeast can be added directly to the flour and other dry ingredients. Instant yeast is also more stable and has a longer shelf life so it can be bought in larger quantities. All good reasons to use it.

However, if all you have is active dry yeast at hand, you will need to dissolve the granules in warm water according to package directions. If it is still alive and viable, it will start to foam and grow in the water. Then you can add it to the dry flour and knead the dough.

If you want to know more about how to use both kinds of yeast successfully, read this article on the types of dry yeast by Serious Eats.

Note: exact amounts are mentioned in the recipe card further down.

You will need the following equipment for making this whole wheat naan recipe with yeast:

What to do with leftover naan

If you have leftover naan, the best way to use it is to make naan pizza! It is a brilliant use of naan, in my opinion, and if you have kids, they will love it. Here's the naan pizza recipe, and this is what it looks like.

How to store leftover naan - Store the naan in an airtight container at room temperature, away from heat, light or moisture. Stored this way, the naan can last for 3 days. For long term storage, keep the naan in a Ziploc bag and keep it in the freezer for up to 3 months.

How to reheat naan bread - You can use any of the appliances you have for reheating naan, but please try not use your toaster to reheat the naan. Since you can't moisten it for warming it in the toaster, it can get too dry and char easily.