You are here: Home » Vegetable

Published: Oct 23, 2018 · Modified: Sep 3, 2021 by Saima · This post may contain affiliate links. As an Amazon affiliate, I earn from qualifying purchases · This blog generates income via ads. 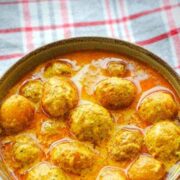 Ah, Kashmiri dum aloo! Now that the weather is turning chilly, this recipe from the northernmost state of India, Jammu and Kashmir, is the perfect antidote to the cold. It is made of a unique combination of aromatic spices that makes for a vibrant, earthy dish. And what I find interesting is that there are no onions, garlic or tomatoes, the usual suspects in any Indian gravy. As a result, the gravy is not very thick, but it is full of flavour.

Kashmiri dum aloo is quite tangy and it's all thanks to the generous amount of yoghurt used in the recipe. If you want to reduce the sourness, put less yoghurt during the cooking process. The only downside is that the gravy will be reduced too, but the potatoes will taste just as good.

I have to mention the two oils used in preparing dum aloo: mustard and canola. Mustard oil, which is used for cooking the gravy, has warm, spicy overtones just like the seeds. It imparts the same heady flavours to this Kashmiri dum aloo recipe. (In fact, most vegetables in North India, not just potatoes, are cooked in mustard oil and this happens to be a sort of secret to their deliciousness).

However, if you don’t like the oil or do not have it at hand, go ahead and use any cooking oil of your choice. If you are using mustard oil, however, it is necessary to smoke it to get rid of the rawness and pungency. Heat the oil until it starts giving off fumes and turns pale yellow in colour. Let it cool down a bit and you’re good to go. For deep frying the potatoes, I use canola or sunflower oil. Serve Kashmiri dum aloo with any Indian bread of your choice: rotis, naan or parathas and enjoy! 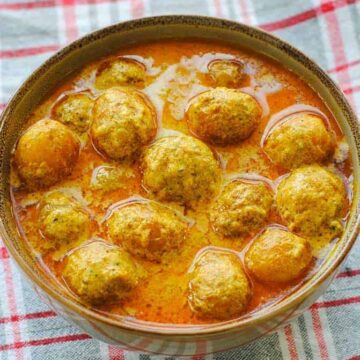